Babywearing sometimes gets a bad press. Comments from ‘helpful’ members of the public or family members with statements such as: “doesn’t it hurt” and “you’ll make a rod for you own back”, can make it extremely hard for parents to feel like they are making the correct decision. I have long since stopped listening but for new parents it can be hard. For many parents though, carrying their babies and toddlers is a matter of survival. Whether it simply allows them to meet the needs of their new baby and older children, gives them their hands back or just because it makes life easier. With a newborn with severe reflux and breathing difficulties, and a toddler to care for, slings saved my sanity.

Carrying our babies helps us to comfort them when they are upset, help us heal from traumatic birth experiences or postnatal depression, and build a closeness with our baby. The memories and shared experiences we gain while carrying our children create a bond that it would be difficult to replicate in any other way. This is why people often get emotionally attached to the slings that we use – they are not just a carrying device – they are memories too. There are families, though, where carrying their children has even more importance and significance, as their babies have additional needs. I am honoured that a number of them are willing to share their stories.

Each has a different journey, a child with a different need, but all find a place for a carrier in their lives. Our first guest writer is Emily. Emily is a mum of 3 beautiful boys from Sunderland and one of the women who inspired me to carry my first child. I was humbled when during her third pregnancy she contacted me for help after her baby was diagnosed with Unilateral Talipes. I will let Emily take over here:

“We first found out at our 20 week scan that Nico likely had unilateral talipes (also known as clubfoot). It was a shock and I worried a lot about what was ahead – particularly about whether I would be able to breastfeed, sling and cosleep with Nico, as easily as I had with his older brothers. The treatment for Talipes is the Ponseti Method. This involves a series of casts to gradually straighten the foot, a tenotomy (operation to lengthen the tendon) and then a number of weeks wearing ‘Ponseti boots’ connected with a bar for 23 hours a day, then overnight usually until the child is around 5. I was concerned about how the casts and boots would work with my wraps and carriers.

After speaking to Rachel at NESL, we decided it should be do-able and the kind people at Connecta sent me a carrier to try after he was born. The carrier fitted perfectly through the boots and bar, making it easy to continue wearing him. He was slung on his way down to surgery at 9 weeks and slung to our regular physiotherapy sessions. It made the whole experience much easier on both of us. We had to adapt our positioning slightly to accommodate the casts and to get him seated with boots and bar, but it was fine and comfortable.

The physios hadn’t seen carrying in action before (I think they were imagining narrow bottomed ‘high street’ carriers) so they’ve been very impressed. The position of his feet in the sling meant that we were allowed into ‘part time’ boots sooner than otherwise. In the carrier, his feet are in the position they need to be in and easy for me to reach down to do his massage and stretches.

We are 8 months into our talipes journey now and only have to put his boot on at sleep times. It’s gone as well as I could have hoped – a few ups and downs on the way but we’ve got through and there should be nothing to stop him running around after his big brothers soon. Then he will be in the sling to try to keep him out of mischief! 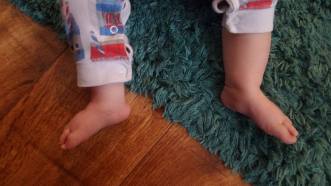 6 thoughts on “Carrying, when it means so much more than just the sling.”