Many of you will have heard of Which? For many they are the first site they check before buying any product: from Cars and Credit Cards to Cots and Carriers. This is where we came in.

In March 2016 I was approached by representatives of Which? who saw the Top Ten Baby Carriers of 2016 research; they were intrigued to know more. It was during these conversations they asked me if I would help them to coordinate parent testing of 14 carriers easily accessible on the high street. This is in order for them to gather data to update their reviews on their website. I jumped at the chance and was excited to hear that Rosie of Sheffield Sling Surgery would be helping too.

At the start of July Rosie and I met with representatives from Which in Durham and they explained what they hope to achieve and explained to us the rationale behind all 14 of the slings we had to test. The main one being they are available on the high street. They want their reviews to be as up to date as possible. Each of the 14 slings would be factory tested for safety and ergonomics (wearer and baby) and be trialed by families.

This is where they needed us. We were tasked to find 14 families who would like to take part. Their babies had to be between 4 weeks and 18 months old, and weigh at least 8lb. We had over 40 emails of interest! They were then to be randomly given 4 carriers to test over a 2 week period (2 slings one week before swapping for 2 more). As part of this test they completed surveys with their feedback. Coordinating this with school holidays, family trips and holidays abroad took a little organisation but I think it will be definitely worth it. I can’t wait to read the results in when they are live. Here is Kirsty using two of the 4 slings she was given to try. 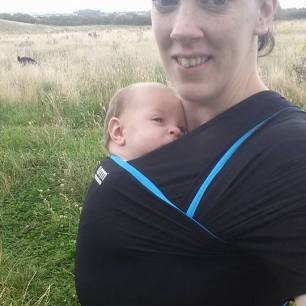 As a ‘thank you’ the 14 carriers will be joining the library shelves. The last 6 carriers are with families now. As soon as they are back I will be listing them on the website. Some will stay here and some will join the mini libraries of Durham City Sling Meet and our Birth and Baby Drop in meet. They include some we don’t have as well as several of our most popular.

As well as helping them with the testing I was also asked if I could help them with providing details on counterfeit carriers. Fake slings are a topic I have written quite a lot about over the last 4 years and the number of fakes continues to grow. I was delighted to be able to help them and am looking forward to what other opportunities arise to assist Which? further.