The next in our blog series on carrying children with additional needs is written by Rachel. She is a mum of two boys and lives in the North East. Her eldest son was diagnosed with Autism just after his second birthday. Autism is a spectrum disorder and those with the condition can vary in severity. Autistic Spectrum Disorders are a “condition that affects social interaction, communication, interests and behaviour”.  Difficulties in communication and social interaction can have a massive impact on families. Carrying Toby, and his younger brother Teddy, has allowed Rachel and her husband to adjust. I will let Rachel take over now. 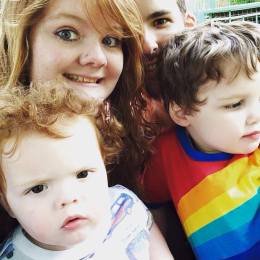 “I’m Rach and I’ve got two lovely little boys called Toby and Teddy who are 4 and 2. Toby is severely autistic and is completely non-verbal…yes he’s never said a word…we believe he will one day! Life with these two is pretty hectic and although the boys are getting older and more independent, babywearing has helped us to adapt and become the family that we are today”. 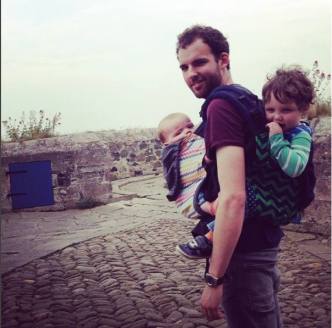 I came late to babywearing, Toby was 6 months when I first brought a stretchy wrap (probably not the most sensible choice!) after being amazed at friends who carried their little ones. We had been given a high-street carrier when Toby was tiny but had never really gotten on well with it. We soon progressed and bought a lovely Connecta (in the fab Zoology print). The sling was a safe place for Toby as despite being very mobile and independent he was increasingly becoming overwhelmed in social situations. He would prefer to be in the carrier at baby groups and when out and about in busy places. I was amazed at the freedom that babywearing gave us and knew that when I had our second child, babywearing would be an essential for us. 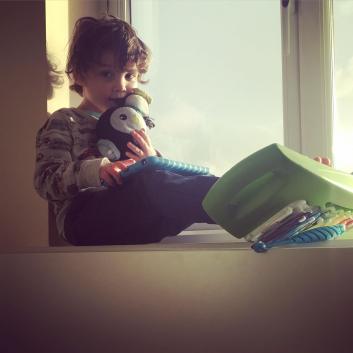 Teddy was born in December 2013 five weeks early and weighed 5lb 14oz. He took us all by 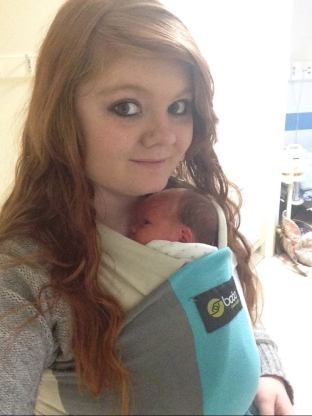 surprise and spent the first few weeks of his life in the neonatal unit at UHND. Thanks to a Boba wrap that we hired from the library I was able to carry him around and have lots of Kangaroo Mother Care which the staff encouraged too. He was too small for my own stretchy or Connecta and the Boba wrap was a life saver in those early days.

Toby was 2 and a half when Ted arrived and had been diagnosed with Autism a few months previous to this after we raised concerns around the time of his first birthday. Caring for a tiny premature baby and a child with additional needs was challenging, especially with lots of hospital appointments and home visits for both boys. Teddy also had lots of allergies and would often have a sensitive stomach and colicky symptoms. Despite identifying sensitivities to milk, soya, egg and wheat and eliminating these from my diet, Ted would often only be comfortable in the sling and spent most of his time either feeding or sleeping in the sling. Toby was also very sensitive to noise and would burst into tears the moment anyone else started crying as he didn’t understand what was happening and was hypersensitive to loud noises. Again the sling kept Teddy content and allowed me to give Toby the time and peace that he needed. 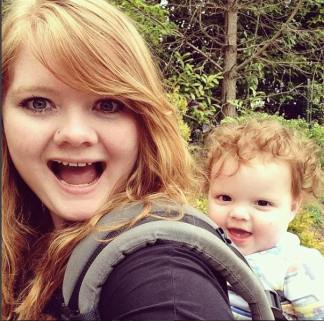 Although I did invest in a Phil and Ted’s pushchair, I didn’t start using it as a double until Ted about 6/7months as the easiest combination for us in the early days was having Toby in the buggy and Teddy in the sling. We had various appointments at Chester-le-Street hospital (often a couple a week) for Toby seeing consultants and Occupational Therapists etc. Usually Teddy would just sleep peacefully in the sling which gave me both hands free to deal with Toby and chat to the professionals involved. Looking back now I not sure how we would have managed otherwise!

As Ted became more mobile himself the sling was a safe place for him too as due to his allergies, toddler groups were often quite challenging. Being able to put him in the sling at snack time allowed him to have a snooze and avoid putting anything in his mouth that he shouldn’t, which made the whole experience less stressful for me.

Sadly, these days our baby wearing adventures are becoming less as Toby prefers to use his specialist buggy (which is provided by wheelchair services) and Ted is an independent two year old who likes to be off! We keep a toddler Tula in the back of the car which they both fit comfortably in and is often used for Ted when we go out on longer walks. We’re thankful for the ways baby wearing has helped us care for and manage both boys’ needs and allowed us to explore places together.

I blog about our lives and adventures at www.beingtobysmummy.wordpress.com if anyone is interested in seeing what else we get up to.